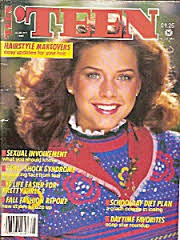 One day when I was nine, I decided that when I grew up I wanted to be a fashion model.  I’d been reading Newsweek magazine, which my parents left out on the edge of the tub in our bathroom, strategically open to stories about issues they wanted us to know about. This was their way of bringing things to our attention without having every day turn into some big serious conversation. (rather brilliant)

I think the article that day was about the increase of anorexia/bulimia in models. This was not an issue for me. I had just burst into puberty and was about as wide as I was tall. I regularly asked for seconds and thirds at dinner, and I hated throwing up, so the whole “obsessive pursuit of thin-ness” angle of the story flew right over my head.  What I vividly remember, though, was how one of the models interviewed said that sometimes, she got to keep the clothes she wore at photo shoots.  That sounded exciting. I was a bit of a budding clothes horse back then, and this sounded like the best perk ever – arrive in the morning, have other people pick out perfect outfits, take a few pictures, then head out for the rest of your day!  I wondered how I should start my career.

I remember feeling discouraged. For about sixty-five seconds. Then it was time for the afternoon top-40 countdown on the radio, so I tuned in, grabbed my hairbrush, and sang into my mirror. I decided I’d rather be a pop-star. Maybe they got to keep the clothes, too? And it seemed like they got to stay up late, and that sounded very exciting! Soon after that, I discovered baton twirling, and spent the next few years convinced that that was my professional destiny. (And indeed, it would provide the first picture of me in a national magazine, when my friend Shelley and I were Maine State Duet champions, and TWIRL magazine posted a little black & white picture of us, grinning and a little chubby, holding our batons and these strange serving trays they gave out that year instead of trophies.)

What I love about this memory is how easily I handled these transitions. It never occurred to me to take it personally that I wasn’t being photographed for national magazines. This was just a fact. No need to be depressed over it; just pick something else to do!

There’s all this talk once you’re a grown up about how to “pivot” when you hit a roadblock, rebuilding vs. staying the course, identifying your skills and finding a way to create something based on those. All good information. But what I miss about my nine-year-old self is how little emotion was invested in these decisions back then. The roadblocks weren’t about me.  Well, other than my rotund little form…and being only nine…and living in Maine, where few scouts are looking for fashion models…and the Dorothy Hamill haircut I insisted on over my Mom’s objection…  But those were just facts. They weren’t personal.

(OMIGOSH…a backhoe just took down an entire TREE in the demolition project outside…I saw it fall outside the window & completely lost my train of thought. Anyway…)

I’d like to be more like me at nine. On good days, my hair is slightly less awkward. I still don’t have a “book.” But it’s fun to remember how easy it is to revamp your plan when you roll with the punches & don’t take things personally.

2 thoughts on “What Happened to My Career As A Supermodel”