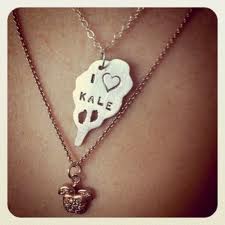 Yesterday on Facebook I learned that many (many!) of my friends have strong positive feelings about kale. I mentioned kale in a post on trends I don’t understand (the others were skinny jeans on men and owning your own live chickens).  The kale lovers came out in droves to defend their beloved leafy greens, posting recipes and favorite restaurant menu items. It was more enthusiasm than I’ve seen for pretty much anything online, with kale support somehow exceeding support for puppies, discount designer handbags, and the royal baby.

Something has gone wrong in the universe.

I’m not against kale, necessarily. I just don’t get the trend.  It’s stiff spinach with a better PR campaign. I once watched a man pull it from the decorative edges of the salad bar at Applebee’s, then happily crunch away. I guess he was an early adopter. (He also believed that spinning 23 times in each direction before bed helped “reconcile” his liver & kidneys, so there’s that…)

I’m more encouraged by the lack of support for men in skinny jeans, although I have several male FB friends whom I’m pretty sure wear skinny jeans and they declined to comment. I’m concluding (read: hoping)  that perhaps they aren’t as passionate about their fashion choices as the kale lobby is about their vegetable, and are just going with the flow until different options are available in stores. Which gives me tremendous encouragement! Hopefully we’ll all be back in straight legs in a couple of years :)

The chicken owners (including my sister-in-law, who takes such awesome care of her poultry pets that my father says on the off chance that reincarnation is real, he wants to come back as one of her chickens) didn’t chime in. I wish they had. Because I wasn’t suggesting that owning chickens is absurd (I was suggesting exactly that with the whole men/skinny jeans thing, and a little bit with the kale…) I honestly don’t understand why you’d buy live chickens and have them live in your yard. I’m not a bird person. They freak me out a bit, what with all the feathers and clucking and sharp pointy parts. And I don’t know how to BE around a chicken: Are they emotional? Do they have felt needs? Or do they run more on instinct, going through life thinking “eat the worm!” and “Oh crap – fox!” and not much else?

The best part of this exchange for me has been the reminder that we are ALL VERY DIFFERENT. There are so many attempts to lump us together into groups, to categorize us and make humanity more manageable.  I love order more than your average bear, but even I concede: we’re unmanageable, and delightfully resistant to generalizations if one is willing to look closely.

I’m grateful for this. I want to look closely enough at life that even if I see SEVEN guys wearing skinny jeans & holding live chickens while they pull the kale from the edges of the salad bar at Applebee’s, I’ll remember that each of them has a different reason for how and why. Because that, my friends, is the stuff memorable conversations are made of.

2 thoughts on “For the Love of Kale”