This is Part 2 of the answer to Donny’s Question: Religion is a big part of your life – how are you raising the kids within a faith-based environment and why is it important to you and Steve?

On Friday I shared a about the why.  Here’s some of the how (the good, the bad, and the Wow, that really backfired…)

We knew going in to adoption that our kids would need to detox.

One frequent commonality among kids who have been neglected is that their lives have been rather boundary-less. If they’re older than three, they may have played hours of Call of Duty and Grand Theft Auto, helped themself to a beer or three, eaten nothing but Doritos and soda for weeks at a time, and stayed up late at night exploring what’s going on on all those grown-up channels. I’m not saying that The Cherubs did all of these things – just that whatever YOU would have explored when you were younger but didn’t because there were adults there to stop you? Imagine if those adults hadn’t been there. Of course, lots of kids live like this and don’t end up in foster care. Things have to get to a whole other level of dangerous before that happens. But let’s just say that there is a ENORMOUS gap between the “everyday normal” of most waiting-to-be-adopted kids and their pre-adoptive parents.

You need a way to bridge this gap.

Our plan is Jesus. (I know that sounds obnoxious, but stay with me. I’ll try to explain…)

Our faith in Jesus (okay, all of God really – Father, Son & Holy Spirit) is the helpful thing Steve & I hold on to when all else fails. You probably can’t imagine it now, but if you adopt, there will come a day where a D in Algebra, a call from the Vice Principal, a bedroom that looks like a hazmat site, or a two month boycott of all foods that don’t contain high-fructose corn syrup will be beyond your capacity to worry about or manage.  You’ll hide in your bedroom telling yourself, “I guess it will just have to be okay if they smell and they can’t do complex equations, because I don’t know how to fix it…” Of course, not all days are like this. Most days are just days. But sometimes, you can only care about one thing, and so you want it to be something that can help.

So no matter what has hit the fan on a particular day…or when a day is SO GOOD that I just want to tiptoe upstairs and revel in the miracle…we bring the Jesus:

We hold hands and pray before meals. Even in restaurants. (Yes, they are mortified.)

We have Prayer/Bible time before bed. We hold hands (you’ll see a theme here. When 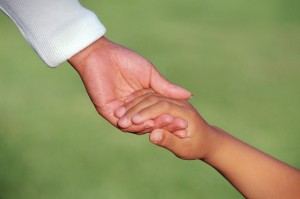 you first adopt, especially older kids, it’s hard to figure out affection because you’re essentially strangers. So opportunities like this where you can connect in a way that’s safe and not creepy are really helpful) We say the Our Father prayer – the Old English version Steve & I learned in Catholic Sunday School. Something about the THY Kingdom come, THY will be done adds much needed solemnity to the endeavor.  Then each of the kids reads a section of the Bible from Steve’s phone.

Most nights, this is a debacle. The Cherubs argue over who’s turn it is to “host” Prayer time in their room. They jockey for position on the bed. One decides to prove that yes she CAN do a pushup the right way. The other “remembers” that he has three weeks worth of dirty clothes stuffed under the bed and he really should take care of that now. (Sounds normal for kids who are 5 and 7, right? Ours are 12 & 14).  THIS DOG comes in and puts her nose on our clasped hands like she’s joining in the prayer time which makes it impossible to focus on God because… cuteness (Strangely, having the dog there seems to focus us all – it’s like somehow she makes us realize, If Bergie wants to be part of this maybe it really is important…)  But it’s rarely the soft, dreamy stuff of which Christian movies are made.

But if for some reason Steve or I suggest skipping prayer time? THERE IS OUTRIGHT REVOLT. Prayer Time is sacrosanct in tradition, if not execution. It’s what we do, and the Cherubs do not take it well when we deviate from this plan.

We pray for healing. If someone has a head or stomach ache, the first thing I’ll do is put my hand on their forehead and say, “Be healed, in Jesus’ name.” Then I’ll ask when the last time they had some water, if they’ve eaten anything recently, and all the other normal questions. But we start with Jesus, and how he helps when we’re sick. I can’t tell you how often we get through the follow up questions and they feel better. It’s pretty cool. (I should also be clear that we also believe that Jesus works through Tylenol, and doctors, and all sorts of other things. We use prayer in conjunction with human wisdom & effort, not in place of it.)

We also pray for them to do well on tests, and for friends who are struggling with challenges large and small. We pray short prayers all the time about all sorts of things, believing that Jesus is there with us in the middle of it all and is always up for a conversation.

And the most unexpected thing we’ve done…

We planted a Church.

As I shared in a previous post, we had a bit of a Goldilocks experience visiting churches

when we first met the Cherubs (this one was too big, this one was too odd, this one made all the kids get up in front of the congregation and do a PRAISE DANCE to a song my kids had never heard before to teach the rest of us about the Holy Spirit…) The kids hated it. We were off to a bad start.

So we switched gears and did church at home that summer. It was great. We started with the basics – who is Jesus, what does he offer us, how would one pray if one were inclined to try, what can you pray for? We talked about how God gives all of us spiritual gifts that are helpful and cool, and then we experimented with them – asking God to speak to us, encourage us, give us ideas to solve problems. Friends came and joined us some Sundays, which lent credibility: Steve & I weren’t the only people who believed that the stuff in the Bible is real for us today. We took communion every week, using sparkling grape juice because the kids were still in State custody and we couldn’t risk serving them actual wine, even just the small amount dipped on a crust of bread.

The best part was how this relieved the pressure for them to pretend to know things about faith. We hadn’t anticipated how HARD it is to come into Church Youth Group culture at the middle school level. You’re surrounded by kids who have been in this world since birth, who all know the skits, the songs, the dances, the bible stories. If you’re already feeling awkward about being the only black kid AND the only adopted kid, there is just no way you’re going to admit that you don’t know who Joseph is or what the problem was with his brothers. So getting the Cherubs out of that was one of the best things we’ve done.

Then one afternoon in July, I was in our home office, scrolling through Facebook while the Cherubs played Wii with friends in the next room. A friend of mine had posted a video from the National Conference of the Vineyard – the denomination where Steve & I had each discovered Jesus before we met. It was a talk called something like, “Characteristics of Vineyard Leadership.” The screen shot was a picture of Rich Nathan (a pastor in Columbus, OH) with a Power Point slide behind him that read You Will Be Betrayed.

I’m embarrassed to admit that the snarky side of me hit click before I even gave it a second thought. Being betrayed was such a defining part of how our Vineyard experience ended a few years earlier. I was totally looking for the satisfaction that comes from having your fury vindicated, as someone in a position of power acknowledges, “You’re right, that was MESSED UP…”

Rich may have said that, but if he did, I missed it. Because something else happened. As Rich described the casual, high-faith approach to ministry in the Vineyard, I realized, “This is what we’re teaching our kids every Sunday in the living room!” Soon I was in tears, which was surprising (I was sure I could not cry any more over church losses) and awkward (with four kids in the next room screaming at the Wii). I was overwhelmed with the realization: We’re not alone in this. These are still our people.  I felt like there was a giant family reunion going on and we were missing it. I didn’t want to miss any more, and I wanted the Cherubs to know they were part of this family.

Steve and I reached out to some of the leaders. After several conversations, our area pastors challenged us: would we be willing to move forward with the church plant plan we’d started back in 2011?

We said yes. But that’s a different blog post :)

But I will say that planting a new church – giving the Cherubs the chance to see week in and week out how God brings people together and then works in each of our lives – has been a really cool experience. They realize that the are part of something larger than just us, something dynamic and real, something personal where they are known and loved.

Church isn’t always this way. But when it is? It’s just the best.

That’s what we want for our kids.