This weekend we watched #2 Cherub sing and dance in Oompa Loompa splendor in her middle school musical. It was SPLENDID. The show was hilarious and fun (thankfully less creepy than the Tim Burton movie) and there were some astonishingly good moments for us as a family that I want to capture and remember. 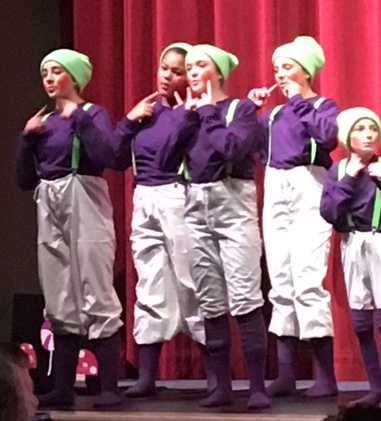 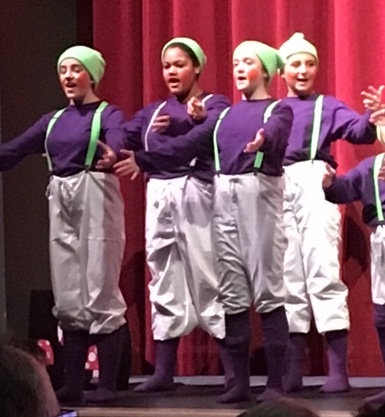 First, different members of the Cherubs’ original family came for all three performances. Friday, Saturday & Sunday, they each drove long distances to a school they were unfamiliar with. They brought hugs and flowers and loud cheers for #2, and bought #1 more candy than he could possibly scoff down during intermission. They are so for the kids.

It’s not easy, what they’re doing. I don’t think this always how it goes in these situations (this was not at all our experience when we had Princess Peach) – and so I’m astonished and grateful that it’s possible. It’s good for the kids (and for us) to have so many people on their team.

Lest I paint TOO romantic a picture here, let me also say that the kids have no idea what to do with all of this familial blending – first they were terrified that we wouldn’t like each other, now they’re like, “Wait, you guys LIKE each other?” They find it awkward. But as one of their uncles pointed out, when you’re 14 & 12, EVERYTHING is awkward. If this is our awkward, we’ll take it.

Second, as we drove home after opening night, I heard #1 say to his sister in a low voice, “You did a good job.”

I was like, “WAIT! was that a sweet moment between my children???”

They laughed and said, “Yeah, it was…”

For all the truth about how much #1 & #2 have helped each other through difficult times, they are also just like every other set of sibling kids I know: they bicker constantly, the one-upsmanship is endless, and they agree on nothing if they can possibly help it. It gets so bad some mornings I’ve threatened to make them walk to school if they don’t cut it out. (This was highly effective the week it was 9 degrees. I think it will lose its power as the temps warm up.)  There aren’t many moments when they say something genuinely nice to one another that isn’t prompted by a grown up.  But this was unprompted and genuine. #1 was right – she did do a good job. He knew how hard she’d worked, and (I think) how much his big brother praise would mean to her. It was precious.

Then we got home and she tripped over something and he made fun of her, so we were back to normal. But still, I think it’s the “good job” she’ll remember.

By the end of the weekend, we were all EXHAUSTED. It’s noon on a snow day right now, and we’re all still in our pajamas. I think big events take a bit more out of you when you’re a new family, because you’re not sure how things will go and there are so many emotions and hopes and relationships at play. But when it all works out? You need to WRITE IT DOWN and remember it, and let it set the new standard for how things can be.