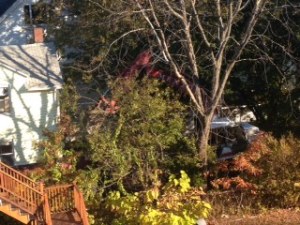 It is LOUD here this morning. There’s a wrecking crew demolishing the house two doors down from us, with a backhoe as tall as the building  (it’s the biggest piece of machinery I’ve seen on a residential project).  When the house went on the market about six months ago, Steve went to a showing. Afterwards he said, “That place is a total demo – the foundation is cracked, everything’s a mess inside structurally. It’s too big a job for anyone looking to fix it while living there.”  Indeed, a contractor bought it, is taking the place down and starting over.

The parallels between demolition/construction and life with God? ENDLESS.  (Or perhaps that’s just me.)

When I was in law school, I heard someone say, “When you ask God to help fix your life, the first thing he says is ‘Thank you,‘ and the next thing he says is ‘Hold on.‘” She then described how, rather than giving your life a nice remodel with some upgraded countertops and a new kitchen island, God sends a wrecking ball (or a backhoe) and rips down your whole life.

I had that happen a few times. Apparently I was a poor builder in my 20s; I had to keep starting over. The hardest part was that even in a house (read: life) you know isn’t working, there are parts you like.  The foundation may be held up by a couple of two-by-fours and some duct tape, but there’s that wall in the dining room where the sun shines in and hits a painting your parents gave you, and you’ve smiled at that sunny wall for years, marveling that someone knew to build the windows and the wall just so. It feels unfair to see that torn down along with all the rest.

But the new is better than the old. It’s difficult and stressful to get there. It involves more tears and anger and letting go than you think you can handle. And unlike with property, no one hands you a check for the value of the life you’ve built before it’s ripped down to make way for something better. At the start of the process, it’s all just loss. Ruin and rubble. Your favorite wall reduced to a pile of torn up drywall, the painting packed away in some bubble wrap and cardboard, nowhere near the sun.

If you’re in a season of God ripping down your life, I want to encourage you. I’ve done this before, and here’s what I know: It’s long and awful…and it’s worth it.  You don’t realize how many work-arounds and adaptations you’ve made to keep a dysfunctional life moving along until those dysfunctional pieces are ripped out. Then you look back and think, how did I do that? Why?

And this would all be delightful if reconstruction moved along at a good clip, if your new life launched immediately thereafter. But it doesn’t, usually. Instead, after the demo comes the really hard part, where you live with huge holes where rooms and walls and a roof (read: relationships and friendships and jobs) used to be; it takes forever to find the right replacements, and there are huge swaths of time when you think, But that house was FINE. Why did I agree to let God tear it down? What if he’s just a shyster and doesn’t come through on his promise?

But that house wasn’t fine.  You let God tear it down because you had the audacity to hope for more.  I’m pretty sure he’ll come through, although it may take forever. In the meantime, you’re better off out from under what was, objectively speaking, just a pile of unsalvageable wreckage that could have collapsed on you at any time. You escaped.

And once the old life is all torn down and carted away? It’s okay to take some time and think about what you want your new one to look like.  Building will take longer than you expect, anyway, so there’s no need to rush. You’ll spend what feels like forever trying to get permits and approvals. But eventually there will be a new, solid foundation. Walls and rooms and a roof. These won’t last forever, either. But they will be so much better now. And it will be worth it, as you live into this new life that God has built for you.

One thought on “Demolition Day”