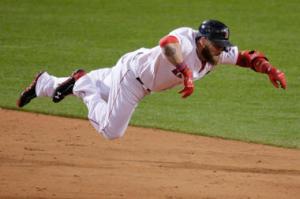 As you might guess, I’m a little excited about this. There have been many late nights, and angsty messages flying back and forth across the internet on FB & Twitter, a whole “nation” of fans trying to work up the courage to believe our team could win the whole thing.

I know it’s just a game. But here’s why it matters: Two years ago, the Red Sox somehow morphed from America’s team to a bunch of epic a$$holes. They were cocky and didn’t like each other, stories came out about infighting and how the pitchers were drinking in the bullpen. It was a disaster.  I’m a lifelong fan, and I remember thinking, “How can this be happening? How can they be such jerks?” It’s one thing to be disappointed in how your team plays; it’s another thing to be disappointed in who they are.

After that grim year, management blew up the entire program. That was a smart move, although it included some bad choices. The team that came out of that process seemed like just a random bunch of guys sent out each game to wing it, with no plan or sense of what they were trying to accomplish. The new manager, Bobby Valentine, was ill-equipped for the job, and led the team to it’s worst season since the mid-1960s and a last place finish  in the American League East. That was a long summer. We fans just sort of wandered around, discovered new TV shows on USA Network, and waited for football season to start.

I wasn’t sure what to do with the idea of not liking my own team.

I share all this not because it’s THAT big a deal. But more because it feels symbolic of other things in life – we all have them – where something that felt wonderful and successful falls apart and you wonder if you’ll ever get back to that place of hope and possibility again.

This season reminded me that you do. 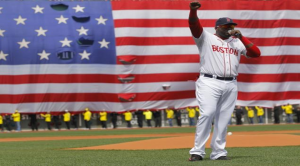 It started last April, when David Ortiz took the mic at the first game after the Boston Marathon bombing and declared, “This is our $%#ing city!”  I still tear up when I see it. We needed that. We needed someone charismatic and fun to lead us out of that dark place and help us LIVE again, and not get swept under by this new reality. 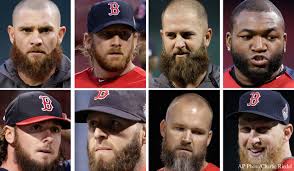 Then the guys won some games. They showed some mad skills and developed quirks and grew some of the nastiest looking facial hair this city has ever seen. Watching games was fun again. The new manager, John Farrell, seemed smart and strategic…and like he wasn’t a jerk. I like that in a leader. And commentators talked about how the players worked really, really hard at their jobs, trying to make something of this season. That felt redemptive.

What I love about last night’s win is that it gives me much-needed proof: Your team can go from worst to first. When you have no choice but to blow up the old system, there may be an ugly, awkward, painful season of failed attempts to rebuild. But you will rebuild. And at some point, God willing, the pieces will fall together in a way you couldn’t have anticipated. You’ll get some come-from-behind wins and access levels of determination and talent you didn’t know were there. Some things go your way that probably shouldn’t. (I’ve NEVER seen a runner escape a rundown like Jacoby Ellsbury did.)  And you’ll get a chance to win the whole thing, whatever that looks like for you.

I love this. I’m grateful. This has been such a fun season to remember that God brings NEW THINGS, and we’re not just stuck trying to cobble together a way forward out of leftover pieces.

So thank you, 2013 Boston Red Sox. Nice job. As the Mayor Tweeted last night, Get out the Duck Boats. We’re going to have a parade!

4 thoughts on “Why It Matters”