So yesterday didn’t end up being the exciting day of healed-from-the-cold accomplishment I’d hoped for. Instead it had more of a yikes-I-might-have-the-flu vibe, and I went from being a couch potato to a mashed potato.

The upside is that, having watched every episode of Top Chef and Project Runway All Stars I could find, I discovered the fascinating gem of reality television that is Preachers of L.A. 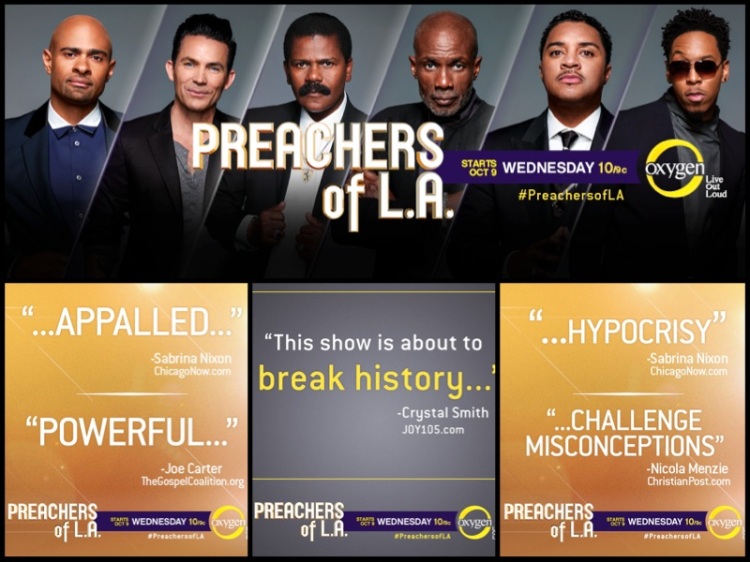 Holy Guacamole. What a soup sandwich.

I love this show. Not the ridiculous cars or bling. I don’t buy most of that (and I’m pretty sure the producers are using the same house for at least two different characters.) A couple of the pastors just seem to be jerks. But  whatever. I like how it demonstrates the way that God uses really messed up people to say some important things about who He is and what He offers. This has been my experience repeatedly as I’ve received life-changing tidbits of advice and counsel from people who,  if I knew them too well, I might be tempted to loathe.  That is one of the most frustrating, real parts of Christian life.

A couple of the Preachers of L.A. guys are complete, egotistical boneheads, and yet when they step on stage, God speaks through them. Don’t get me wrong – not every word they say is coming from heaven, especially they send the donations buckets around (and around, and around…)  But I’ve received enough encouragement over the years from pastors whose personal lives were later revealed to be a total train wreck that I don’t discount that something real happens in those ministries, too.

One example: The spiritual advice on which Steve and I built our marriage came largely from a ministry very similar to what you see on this show. We couldn’t find much helpful advice anywhere else in church circles (other than “you’ll fight more than you expect”) but one day I stumbled across an African-American evangelist on TV, talking about getting married at the age 50. She was blunt, honest, and doled out a whole lot of tough-love wisdom in between the appeals for cash.  We ordered a set of DVDs from a conference she and her new husband, along with several other couples from their denomination, had put together, and we spent our evenings watching and talking about these flamboyant, charismatic talks on how to build a marriage.  Almost ten years later, we still quote some of those talks. That advice has guided us through countless challenges…but more importantly, it has steered us AROUND more disasters than we can describe.  We are so, so grateful.

Why don’t I tell you who this wonderful ministry couple is, so you can order the DVDs? Because she later admitted to attacking her husband with a brick, and accused him of trying to strangle her. They divorced amidst a media frenzy of lawsuits and criminal charges, after which she became a “life coach,” and he ran an online contest to have his fans select his next wife.  It was an ugly, ugly mess.

Were there warning signs that things were not entirely holy and honest earlier in their ministry? Yes.  I didn’t buy the stories they told about how he went from jobless and practically homeless to stuffing $100 bills in her purse when she left on trips so she could remember that her husband loved her & was taking care of her. It was painfully apparent that those were always her $100 bills to begin with. But whatever. If Steve and I had focused on how we felt about all that bling, we’d have missed the good advice God was speaking through these charismatic, messed up people. Those talks had so much good stuff in there amidst the messy delivery. I’m glad we didn’t let the bling distract us.

There’s a test we can run to evaluate whether what someone says is coming from God: Is it consistent with the Bible? No one will bat a thousand on this.  But the percentages have to be trending in a good direction.

The other thing that brings me comfort in this messy world of ministry is this: In the twelve or thirteen years I’ve been in the Christian faith, there are repeated examples of what happens when a public person’s percentages dip below a certain point: God removes them.  There’s a scandal or a breakdown or some revelation of moral failure (or criminal charges involving a brick) that makes the whole facade come crumbling down. This is why I can take what is from God from these charismatic preachers and not get distracted by the Bentleys or mansions or gold chains that make them look like NFL players. Whatever. If their overall percentage of stuff from God vs. stuff from them dips too low, God will take away their position. In the meantime, God gives us wisdom to sort out the real gold from the distracting (quite possibly rented) bling.

If I could change one thing about Preachers of L.A.? I wish the producers showed more of the real work these men and women do. We don’t get to see much preaching. I wish we did. Who knows if that might let God help Oprah live her dream of helping others “live your best life”?  But if you look for them, there are these little moments where God breaks in. Small comments that are spot-on, or a real pause when one of the pastors has no idea how to answer a difficult question and resists the urge to look like he knows what to say. For those, I’ll keep tuning in.