This is such a good question! And yet the strange thing is, the answer for us is no. When we realized The Cherubs were the kids for us, we moved forward and have not looked back. The challenges we wrestle with today weren’t things that could have been flagged earlier, or even things we would have avoided if we’d known.

That said, we know of other adoption situations where things were less straightforward: where DCF withheld key information that would have been a red (or at least a yellow) flag.  Or had a child move in to an adoptive home immediately, with no transition time. Or said that a child’s academic records were mysteriously missing because the school switched from paper to computer storage and “lost all the files.”  There’s a lot of bullsh*t in this process, no doubt about it. Some you can get through by asking enough questions and refusing to be pushed. But other things you just have to take a chance on and deal with as they come up.  This can be tough, and there’s a possibility that some hard choices will need to be made down the line. Or not. There’s really no way to know. Which is one of the ways this is a lot like biological parenting…you just don’t know.

There is a point where taking this plunge requires you to believe that you can learn to swim, and that you have what it takes to adapt to different depths and changing tides. You are banking on yourself – your ability to learn, adapt, grow – far more than you’re banking on the kids. That’s important. 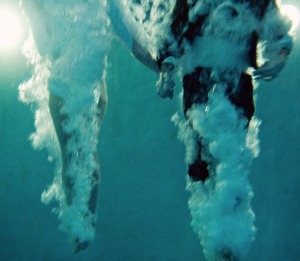 I remember an exercise we did in our adoption training class, where we all picked a piece of paper out of a hat with a set of circumstances/reactions/behaviors written on it that were common among children who have been through the trauma. Some things sounded mild (resistance to rules/authority, a child who considers herself an adult), while others were totally alarming (violence, setting things on fire). Then we were asked, “Your child exhibits this behavior – what do you do?”

At first, it was incredibly awkward. I remember feeling ashamed to have no answers, and afraid that this would disqualify us from adopting. But just the opposite was true. Our instructors wanted to put this on our radar screen: Kids who go through trauma are going to have some form of “aftermath,” and you can’t always tell right away what that will look like. They wanted us to understand that the kids we were considering were people, with a full range of human reactions. They were not dream fulfillment objects for us, waiting to run into this bright & happy new life with nothing but smiles, hugs, and giggles.

I’m pretty sure all of us in the class ignored this piece of wisdom, but that’s okay. It was there for us when reality hit and we needed it. Then were were grateful to have been told in advance that this is part of the process.

We did a lot of due-diligence before saying yes to this adoption. We’d stepped back from numerous other possibilities because one or both of us didn’t feel like it was a “green light” for one reason or another. So when we saw the Cherubs’ profile, and as each step revealed more and more that seemed like a really good match, it was easy to recognize what yes felt like after so many no’s.  And once we made the decision, we never looked back. There was so much to focus on as we shifted from “waiting” to “matched” to “we just met our kids!” to “Omigosh they’re moving in tomorrow…”, it was pretty easy to keep our eyes looking at the next thing ahead.

No matter what, adoption will be more difficult than you expect. For everyone involve. You are taking children who have never met you, putting them in a family situation they have no say in, and telling them, “Trust me! This is gonna be great!”

If you don’t think the sh*t is going to hit the fan from time to time as you try to make this work? You are – by which I mean, we were – naive.

Here’s the thing, though: That’s okay. There is incredible power in going into hard challenges with more confidence, hope, and bravado than reality might suggest, so long as you have some wisdom lurking around the edges for when you need it. As I said, to get in the pool at all, you have to believe you have what it takes to learn how to swim. If you take this plunge, you will learn how to swim, and it will be worth it.

Thanks for the question, Karen. I hope this helped!

One thought on “Adoption Question: What Do We Wish We’d Known?”