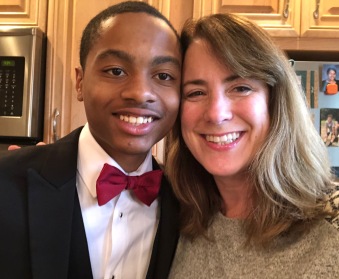 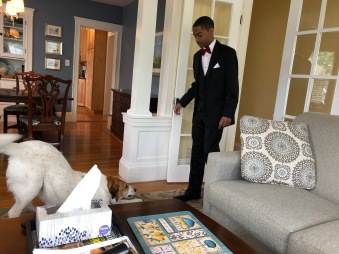 He looked ridiculously handsome, and the weeks leading up to this had some of the highlight moments of my parenting experience. Kudos to #1 – he handled most prom prep on his own. But I got to be there to explain cuff links, consider the merits of bow tie vs. regular tie, assure him that he looked dapper, and to help keep our giant white dog away from him once he got dressed. It was a blast.

And there was a bonus…

Flashback: In 2013, not long after Steve & I moved to this town, I dropped some books off at the library one evening and then couldn’t leave. The street was closed, There were buses & limousines everywhere, and the Town Common was PACKED with parents and little kids and grandparents on all the benches. There was a DJ spinning tunes and cameras from the local news. Clearly something big was happening. Then someone told me it was the GRAND MARCH for seniors going to prom. I couldn’t quite imagine it. But wow, what a scene it was. After a bit of a wait, a PARADE of resplendent seniors emerged from a nearby building and processed majestically through the Common. Sunlight bounced off of sequins, rhinestones sparkled. Tuxedoed young men held their date’s dresses out of the dirt, and young ladies wished they had purchased their shoes a half-size larger. It was glorious.

And when it all cleared out and I could drive away, I was a little sad that I’d never get to have a kid march in that parade.

Well didn’t THAT turn out differently than 2013 Trish expected?

Because early last week, my friend Julie told me that the juniors also have a prom tradition here in Star’s Hallow. They don’t have a grand parade. Instead they have a sort of practice event, a semi-spontaneous gathering at the Gazebo. (Yes, we have a gazebo). They take informal pictures in friend groups and occasionally with their dates (although many of the pairings were, it seems, just for the purpose of pictures, and perhaps so the boys would have some direction about what color tie to pick). The sun came out five minutes before they arrived after a full day of rain, and they all smiled and posed and soaked in the fun of the moment. It was great.

Then they went to the prom, where from what I understand there was chicken ziti broccoli and some shredding of the dance floor. Later, I got a text that said, “We’re on our way to IHOP…”

And then at 1:00am, I heard #1 Cherub calling from the bottom of the stairs, “Mom – Cam’s here! Do you want to take a picture?” I’d told him to grab a picture of the two of them sometime during the evening, not expecting it to happen at 1:00am in my kitchen. But whatever, you gotta seize these opportunities when they come. So I crawled out of bed and captured this fine moment: 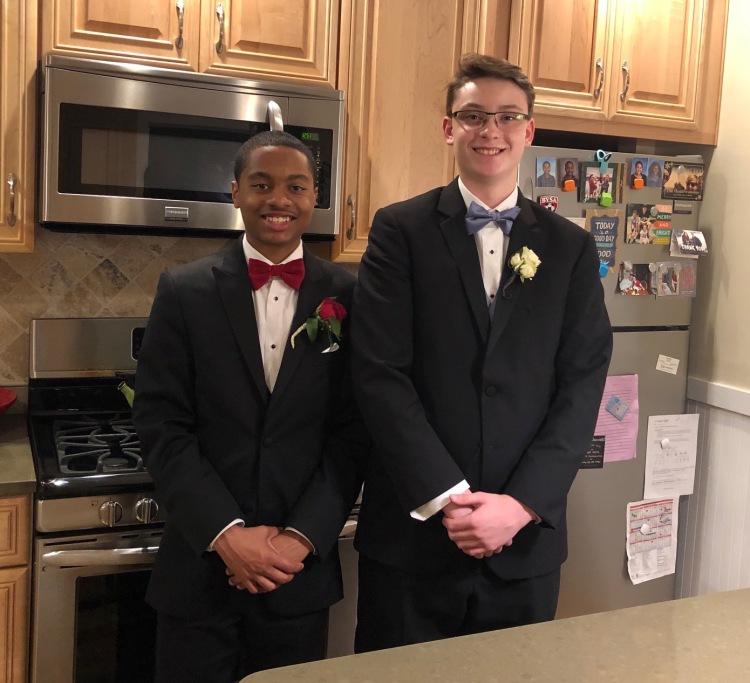 I think it pairs nicely with this one, from Halloween:

Then yesterday we had more sun (!!!) and watched all those same boys get muddy on the soccer field in a 5-2 win.

It was a good weekend. A bit like an episode of The Gilmore Girls, if Lorelai had had a son.

We don’t take those for granted anymore, so we make it a point to notice and celebrate :)

2 thoughts on “A Good Weekend”