Today is our 15th Anniversary!

I don’t have any profound words to share about life or marriage right now, but I was looking through pictures last night and they made me laugh, so I thought I’d share them.

This is a total highlight reel – no hard things mentioned here. But sometimes it’s good to remember our highlight reel, and move those moments up to the front of my mind so I don’t lose sight of them. 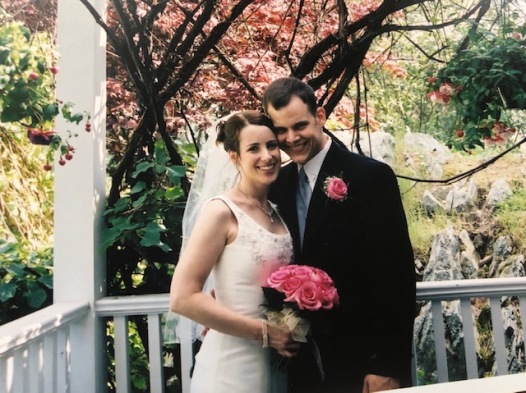 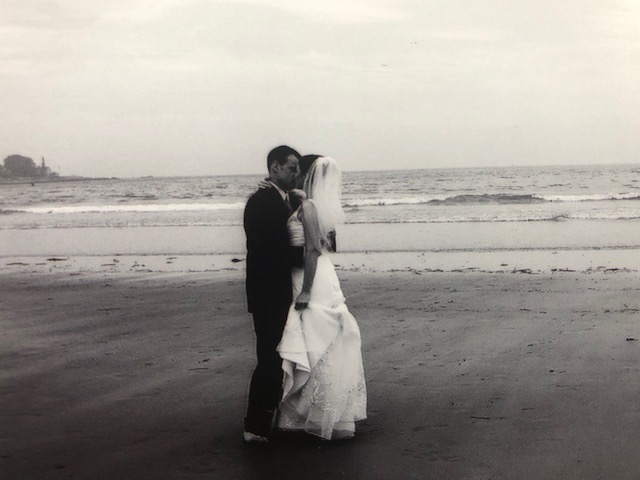 Lots of laughter, shared looks, and glee. Then this last pic where it’s clearly time for us to find a room.

Next, here’s a gem from about a month after we got married, when Steve accompanied me on a trip to Dallas…for a Mary Kay convention.

I was an enthusiastic and delighted seller of the world’s best mascara, and he (one of a VERY few males in the building) was such a trooper! He sang Pink Cadillac at 9:30 in the morning, listened to motivational speeches about products that had very little relevance to him, and tried coffee for the very first time. (Friends, he ordered a VENTI. Twenty minutes later, his was humming, bouncing in his chair, and so very excited about what was possible for my Mary Kay business! Fully caffeinated for the first time in his life, he turned to me and said, “You know what? You should name your MK team Trish’s Dishes! I’ve figured it all out! Your slogan can be: Why be a teacup when you can be a PLATTER?!“)

A few years later, here we are celebrating the publication of my first book, He Loves Me, He Loves Me Not: A Memoir of Finding Faith, Hope, and Happily Ever After. Our friend Laura even made us a cake replicating the lipstick-covered frog! 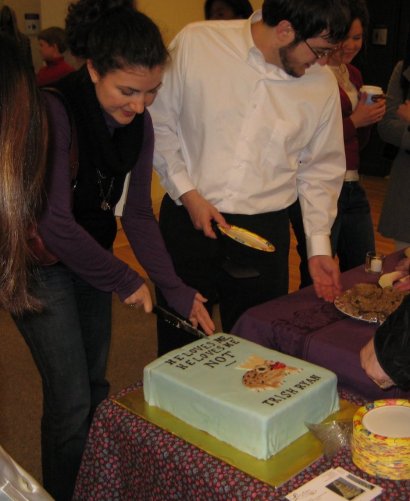 And here’s a link to my original blog, and a video I made for my second book, A Maze of Grace: A Memoir of Second Chances. Behold, Emergency Backup Steve!

Jumping ahead to 2012, this is our awesome foster daughter, Princess Peach:

On this day, she came into the kitchen in tears because she’d bonked heads with the dog while trying to see inside of the dog’s ear. She needed an ice pack RIGHT AWAY. But oh, wait, we’re having chicken salad for lunch? With CRANBERRIES? She couldn’t possibly wait another minute for such nutritious goodness. This is what we came up with.

About a year later, our beloved THAT DOG died after 18 years of magnificent existence. We are dog people, so we knew we needed to fill the space she’d left, but it was hard to imagine what sort of dog could follow an afghan/cocker spaniel mix. It’s not like we could just go out and get another one of those. We knew we wanted a dog that was big, and fluffy. And it had to “look like a Bergie,” whatever that meant, because Steve wanted to name it after Boston Bruins’ star, Patrice Bergeron.

When we saw this fabulous/unexpected/probably one-time-only-unique-in-all-the-world genetic combination (Great Pyrenees/beagle maybe?) on Petfinder, it was obvious she was the one. This is us right after we met her.

Speaking of big meetings, here we are in 2015, on the night we met the Cherubs.

See those smiles? We’re all terrified. But in a good way, like when you embark on something impossible but have a feeling it just might work out.

Two months later, this is our 11th wedding anniversary. It’s about 9:55pm. We were at Target, scrambling, getting ALL THE THINGS, because the next morning the Cherubs were coming to live with us for good. I said, “Hold on! We need beach towels!” and Steve said, “Okay you grab those and I’ll be right over here…” 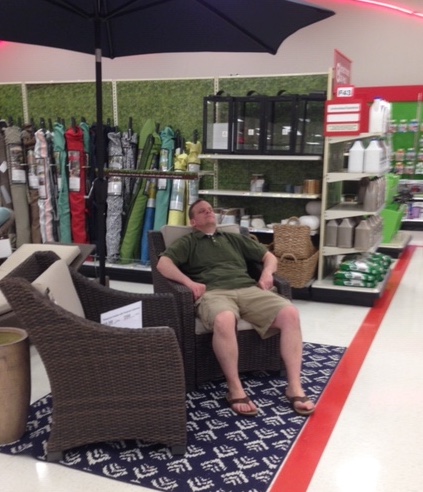 The next spring we finalized the adoption: 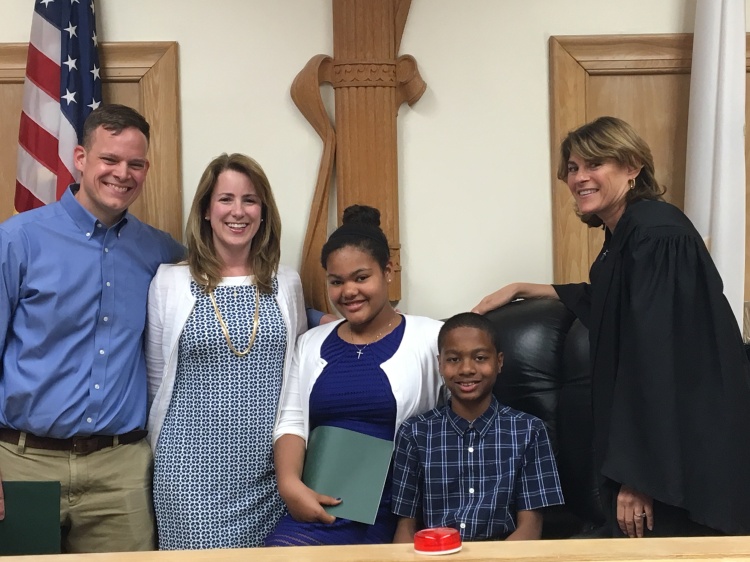 The judge was new to the bench. She’d been looking forward to this all day, she said. She teared up during the ceremony.

For about three years, we led a church in Kendall Square called Greenhouse Mission. Highlights included sermon illustrations by #2 Cherub, baptisms, and God surprising us, pretty much every week. 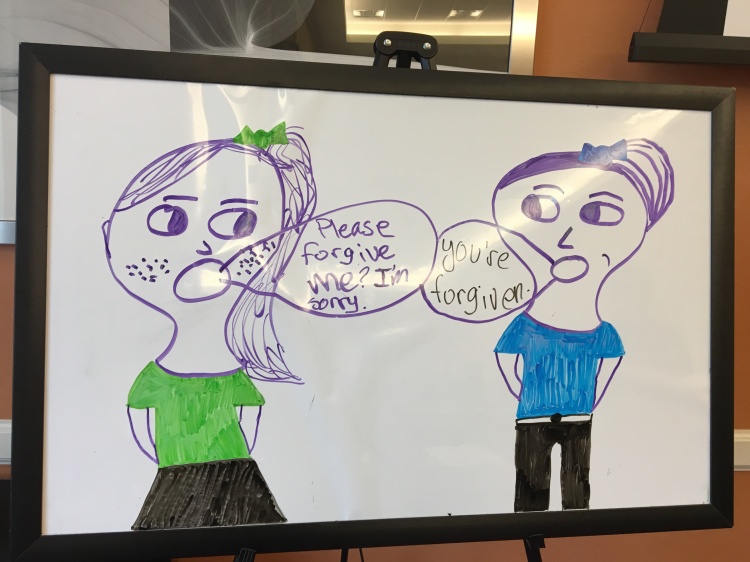 Finally, This is us last month. 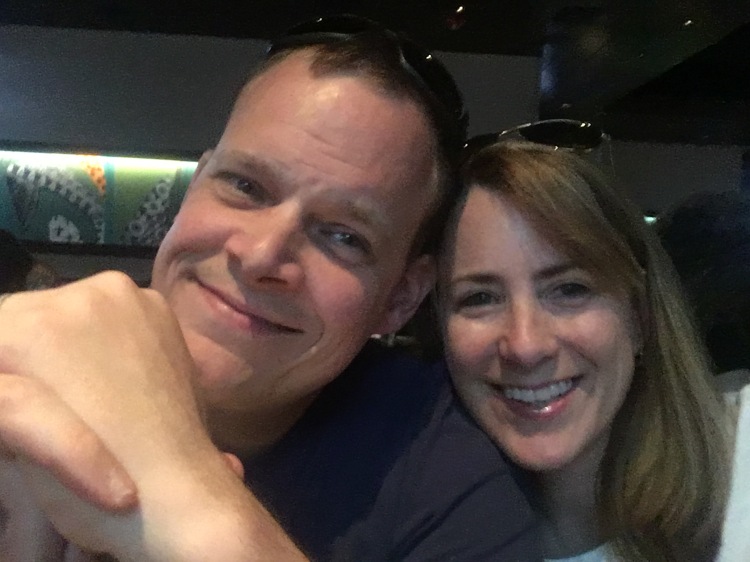 I have no idea where we were, or why there is giraffe-themed decor on the wall behind us. Sometimes for date night we just land at a place, eat food, and enjoy the weird wonder of being together and still making each other laugh.

I am grateful beyond words that this is true.

Maybe the best thing I can end with is this video my publisher made for the launch of Maze.

Towards the end, I say something like, “Part of my story is not letting myself be defined by what isn’t going right, but instead keeping my focus on what is possible.” That is true now more than ever.

Here’s to Happily Ever After in all its complex wonder.