It’s been awhile, huh? It’s been one of those odd seasons when it would be totally possible to sell you the lie that things are entirely wonderful. By social media standards, we have it all going on:

All of those things happened – they’re true and were wonderful, and I’m grateful for them. Even writing them out makes me feel like such a jerk for what I’m going to write next, because I’ve been fighting in my head for over a month now, asking myself in a stern, frustrated tone, TRISH WHY CAN’T YOU JUST FOCUS ON WHAT’S GOING RIGHT AND LET THAT BE YOUR REALITY???

But here, after a lot of processing, is the rest of the truth:

Our adoption has collapsed. Not legally. But internally. We knew things had disintegrated with #2Cherub. She’s been in a state of pretty much non-stop fury for almost two years now. But while she was away at camp, #1 admitted that while he likes us fine and is grateful for what we’ve done for them, we’re not his family. This wasn’t said in anger or as a way of lashing out or reaching for independence. This was about Steve & I facing what we’ve ignored for a couple of years now. The kids NEVER wanted to be a family with us. They didn’t sign up for adoption. It was forced on them because there were no other options. But as soon as they can leave, they will.

#1Cherub is making the best of it. He’s learning and growing, developing the skills he’ll need in life, availing himself of the things we make possible. As sad as this is for us, he’s an awesome roommate.

#2Cherub is blowing up everything around her. She’s not wrong for being angry, and it’s a miracle that she’s as well developed as she is. But things here are not pretty.

Before we left for vacation, I met with one of the social work mangers who  helped us adopt, looking for help. #2Cherub has made it clear she does not plan to be here once her brother graduates from high school next year. We figured that she’s not the first young teen adoptee to decide she wants out, and there must be some options for her, even if they’re not our first choice. So I made the call I thought I’d never make, and admitted that we are approaching a 911 situation and staring down multiple things we will not be able to handle.

I left that meeting so furious, I could hardly find my car in the parking lot.

Apparently, Steve and I totally screwed up by PARENTING our kids. That was never the expectation. The social worker almost laughed (nicely of course – she’s really a nice person) at the idea. Then she set me straight. OF COURSE the kids don’t want to be in our family. OF COURSE one of them is doing things that put herself and others in danger and destroying things and relationships everywhere she goes. OF COURSE life is increasingly miserable and they would rather be with anyone other than us. THAT’S JUST HOW IT IS, she said.  And our assumption that they’ll both graduate from high school? Yeah, I’LL PROBABLY NEED TO LET THAT GO. She was genuinely astonished that they’re not both flunking. When I told her #1 is looking at colleges, it was as if I’d told her we’d sent him on a shuttle to Mars.

Apparently, Steve and I were never supposed to PARENT, as that’s not what “these kids” (meaning all kids adopted from foster care) need. Instead, we are supposed to CHAUFFEUR them to an endless array of therapists and doctors, whether they want it or not, so the experts can test them and talk to them and assess them endlessly, and experiment with solutions that aren’t really expected to help. Because the goal is not to build a family. The goal is to build a paper trail showing that we tried things and nothing worked. “You might need some help with the administrative side,” she said. “It’s a lot of paperwork.”

Which is what the state wants you to say, because they don’t want to deal with the mess, either. The mess of (let’s be honest) selfish biological families who don’t take care of their own members, and naive hopefuls like us, who hope that our dreams of family might be a place these kids can find a new chance at abundant life.

(And don’t come at me with your “Everyone is doing the best the can/let’s focus on everyone’s strengths” crap. These kids have been LET DOWN by the people who were supposed to take care of them. That is the banner over foster care, and it doesn’t help anyone to pretend otherwise. When we refuse to place fault on the bio family, kids assume the fault is theirs. I think we can all agree that that’s not okay.)

So, in an ironic twist, because Steve & I have been able to manage things as parents thus far without help, we probably won’t be able to access help now that we need it.  Which is likely for the best, as there really is no help, professionally speaking.

Yes, there are hotlines and programs and an extensive laundry list of practitioners  who will evaluate traumatized children and suggest things – inpatient, outpatient, neuro-psych tests, drugs. Some take insurance, some don’t. There could be a wait list of up to 18 months. All involve hours of driving for minutes of service. But here’s the worst part: We shouldn’t expect much, because most of the time, none of it works, at least not at this stage of life.

BUT, the worker said determinedly, trying to normalize the wide array of really abnormal situations we’re dealing with, this is what we signed up for.

Let me tell you, it is not.

We were not told that bonding would likely never happen, that our kids would, in all likelihood, not ever want to be part of our family, or that we’d be putting ourselves in ongoing, increased physical and legal danger by taking this on.

They could have told us. I’m pretty sure we would have adopted anyway. The Cherubs are great kids, and it would have been worth it to us to save them from life in foster care. In fact, I still recommend adopting from foster care. If you talk about wanting to make a difference in the world, leave a legacy, life a life that matters? This is THE way to do it. But it will go so much better for you if you have accurate information to work with. Here’s the thing:

I’m not mad at the kids for not wanting to be a family with us. I’m mad at the workers in the system who sold us the lie that family was a viable goal.

Had we known, we could have skipped FOUR YEARS of attempting to build a family, and gone straight to “We have two teens who live with us and we’re teaching them how to function in the world.”

Four years is SO MUCH MISSED TIME, time wasted on awful family dinners and ruined attempts to “make memories” and hugs at least one of them absolutely did not want.  Instead, we could have done the normal thing people do, where you get to know each other over time and see what sort of relationship develops as you go through things together.

I look back on the advice we took from experts, and I see how stupid most of it is when you consider actual human relationships. (Later this week, I’ll share the advice we wish we’d ignored (& why), and what we’d do differently now.)

Steve and I have spent most of this summer talking about how to shift gears. How to give the Cherubs the best version of “group home” living we can, in the hopes that it will get #1 to graduation and off to college, and #2 one year closer to being the adult she imagines herself to be. The good news is, if the experts are failing, whatever we try won’t be worse that that.

Let me end with some good news. As I mentioned at the top of this post, we just got back from a family reunion. There were three generations from thirteen states. And knowing what we now know about our situation, Steve and I didn’t try to loop the Cherubs into an epic family moment, at least not with us. Instead, we told them, “These are nice people and we’ll be in a fun place. Enjoy it the best you can.” Then we set them loose to experience all the different sorts of families that have bloomed from this particular tree.

They seized every opportunity to be away from us, as we knew they would. It hurt, but I think that’s normal. Being around so much family – availing ourselves of the village – gave Steve and I space to work through our sadness and loss without the kids having to see it. We had the luxury of knowing that whoever they were with, they were with good people. People they could learn from and emulate, and also just enjoy.

I don’t know most of what they did, but I know this: They saw different parenting styles, different ways of interacting. They saw people laugh so hard they hiccuped, bicker and make up, and reach out to one another with understanding and acceptance. They saw children be corrected in all sorts of ways and then be invited right back into the fun. They saw photo albums and heard stories about generations of people who found ways to function in life and build connections loose enough to function and strong enough to hold. They were given so much, by so many. And I love my family so incredibly much for opening their arms to The Cherubs and sharing who they are.

On an outing with my cousin and her family, #1Cherub bought a hilarious giant teddy bear he never would have looked at with us. And my cousin sent me this picture of them with her kids. See those real smiles? The Cherubs don’t ever smile that way in pictures with us. So the best way we can love them right now is to stop taking all those fake pictures, and set them up for real ones instead. 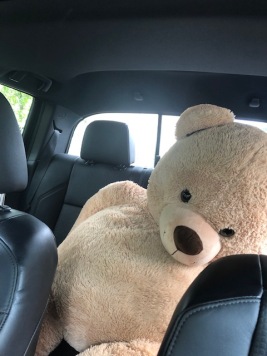 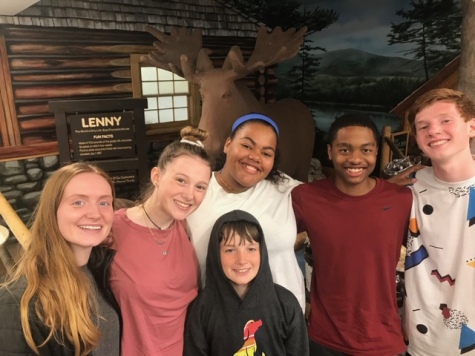 9 thoughts on “Two Realities, both of them true”